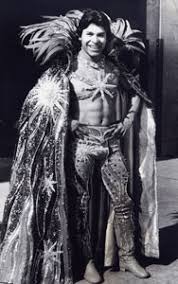 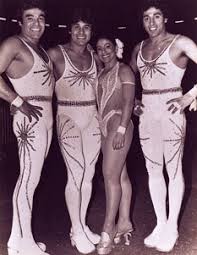 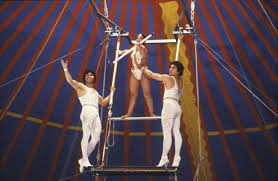 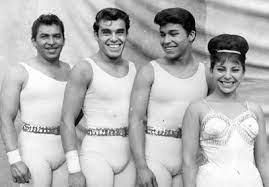 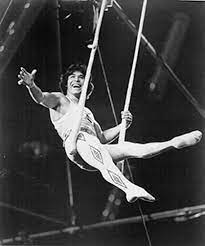 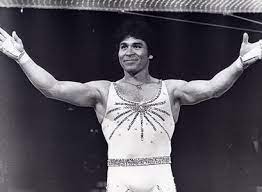 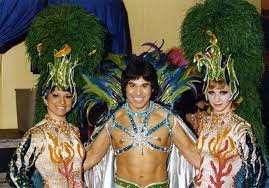 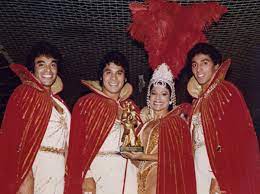 The Gaonas are a large Mexican circus family. Since the flying trapeze has long been a specialty of the Mexican circus, it was inevitable that flying acts featuring members of the Gaona family would call themselves, with some legitimacy, the Flying Gaonas. And indeed, this has happened. To the circus world, however, there has been one and only one Flying Gaonas: the act in which, for 35 years, Tito Gaona caught flawless triple somersaults with extraordinary grace and astonishing consistency.
Victor Gaona Murillo (1925-2016) was born to an old, prolific Mexican circus family that traces its roots to the Circo Gaona y León, created in 1891 by Bernabé Gaona Ramos, a former military officer (whose brother, Rodolfo, was a well-known torero), and Carlos León, a trapeze artist. Victor’s father, also named Bernabé, was a celebrated clown in Mexico under the name of Yoyito.
Victor married María Teresa Palencia, who didn’t belong to a circus family. Together they had six children: Maria Guadalupe (“Lupe”), Jorge Armando (“Mando,” born November 19, 1943), Silvia Graciela (“Chela,” born May 23, 1945), Victor Daniel (“Tito,” born August 29, 1947), Ricardo (“Richie,” born May 25, 1957), José, and Marco Antonio.
The children weren’t thrown immediately into the world of the circus. They went to school like any other kids in their hometown of Guadalajara. During their summer vacations, they visited their father, who toured with various circuses in the United States. But they had circus blood in their veins, and Tito often claimed that, by age three, he already wanted to join the circus. When he saw the film Trapeze (1956)—Carol Reed’s tale of an aging flyer and his gifted young pupil, starring Burt Lancaster, Tony Curtis, and Gina Lollobrigida—Tito decided he wanted to be a flyer. Or so he claims. By the time the movie came out, he’d already had a taste of the trapeze: in the summer of 1954, at age seven, he was announced as “the world’s youngest flyer,” with the Flying Valentines at Tom Packs Circus in New Orleans.

From the Titos to the Flying Gaonas

Eventually, Victor put Chela, Mando, and Tito to work on a trampoline act, and the Titos, as the act became known, joined their father in the U.S. Tito had also trained on the flying trapeze with Fidel Farías, of the Flying Palustres, and Victor had created an aerial casting act for him, with his cousin, Mario Gaona. Meanwhile, Tito’s siblings also began to train on the flying trapeze during their spare time. Eventually, the Flying Gaonas made their debut at Clyde Beatty-Cole Bros. Circus in Palisades Park, New Jersey, in 1962.

With trapeze legend Fay Alexander as catcher, Tito caught his first double-double (a double somersault with a double twist) that same year. Afterward, Victor acted as the catcher in the act. During that period, the Flying Palacios, with triple-somersaulter Lalo Palacio, were starring in the Ringling show, and the triple, still a rarity at the time, became Tito’s goal. He caught it for the first time in 1964. The following year, he added a return to the trapeze bar with a double pirouette, in the manner of the legendary Alfredo Codona. Tito would later make it a triple pirouette.

In the winter of 1962, the Gaonas brought their trampoline and flying acts to Europe, first to Berlin at the Sport Halle, then to Circus Scott in Sweden, where they would return several times. It is at Circus Scott that Tito began to turn the triple consistently. The Gaonas also worked at Circus Krone in Munich, and in the winter of 1965-66, they appeared with Bertram Mills Circus for its final season under the management of Cyril and Bernard Mills at London’s Olympia. There, the Gaonas performed their acts for Queen Elizabeth II and her family.

In 1966, the Gaonas signed a contract with Ringling Bros. and Barnum & Bailey, which John Ringling North had just sold to Irvin and Israel Feld. They would stay with the Ringling show until 1978, becoming the leading star act of the circus’s Blue Unit. In 1974, the Ringling show featured two Flying Gaonas acts: the original one and a second troupe led by their cousin, Francisco Gaona. This would be the first, but not the last, appearance of another troupe calling itself the Flying Gaonas.

When Victor “Papa” Gaona retired from the act in 1975, he was replaced by Manuel Zuniga for one year, then by the Gaonas’s cousin, Lalo Murillo. It was with Lalo Murillo, and under the guidance of legendary triple-somersaulter Antoinette Concello, that Tito began working, in 1977, on the still-unattained quadruple somersault. After endless practice sessions before or after the show, he was able to turn it, but not catch it. He attempted it at every performance during the 1977-78 season, but to no avail. Despite Tito’s inability to perform the feat, the audience got an added thrill out of the attempt.

In December 1978, the Flying Gaonas participated in the International Circus Festival of Monte-Carlo, winning the circus world’s highest award, the coveted Gold Clown. After they left the Ringling show, they starred in a Feld-produced show, the short-lived Cirque International de Monte-Carlo. Then they went to work internationally, notably with Circus Knie in Switzerland and back with Circus Scott in Sweden.

The composition of the troupe changed in 1980, when Richie Gaona—who had been flying for the past three years at Circus World, the Feld-owned circus-themed amusement park in Orlando, Florida—joined the troupe to replace Mando as a flyer. Mando, who had been a gifted, remarkably elegant flyer, became the act’s catcher.

In 1981, the Flying Gaonas began a long association with the Big Apple Circus, appearing in its Lincoln Center holiday productions and, until 1987, on tour. They did their last season in Brazil in 1997. Afterward, Mando went on to manage a custom motor-home company in Florida, Chela settled in Venice, Florida, and Richie became a stuntman in Hollywood, before opening a trapeze school in Woodland Hills, California. Tito wrote his memoirs and opened his own trapeze schools in Venice, Florida, and Boston, Massachusetts.
In 1982, Mexican flyer Miguel Vazquez, of the Flying Vazquez, caught the impossible quadruple somersault. Flying trapeze entered a new era. But until then, and even after, the Flying Gaonas were in a league of their own. There was of course Tito’s extraordinary charisma, his ease and elegance, and his impeccable triples; but style and elegance were a characteristic of all Gaonas. “Break your neck,” Victor was fond of saying, “but point your toes!” Mando and Richie were also supremely elegant flyers, and Richie’s triple, which he rarely did after he joined his brothers, was flawless. Theirs was an act that became a beacon for a generation of flyers and was one of the greatest flying acts of circus history.

In 2015, Tom Moore produced a documentary on the career of the Flying Gaonas celebrating the art of flying trapeze, The Flight Fantastic. The film obtained a huge success all over the United States. Victor Gaona, who created, in all meanings of the term, the Flying Gaonas, had a chance to see it—and to be proud of his extraordinary achievements. He passed away on November 10, 2016 at age ninety-one.
See Also