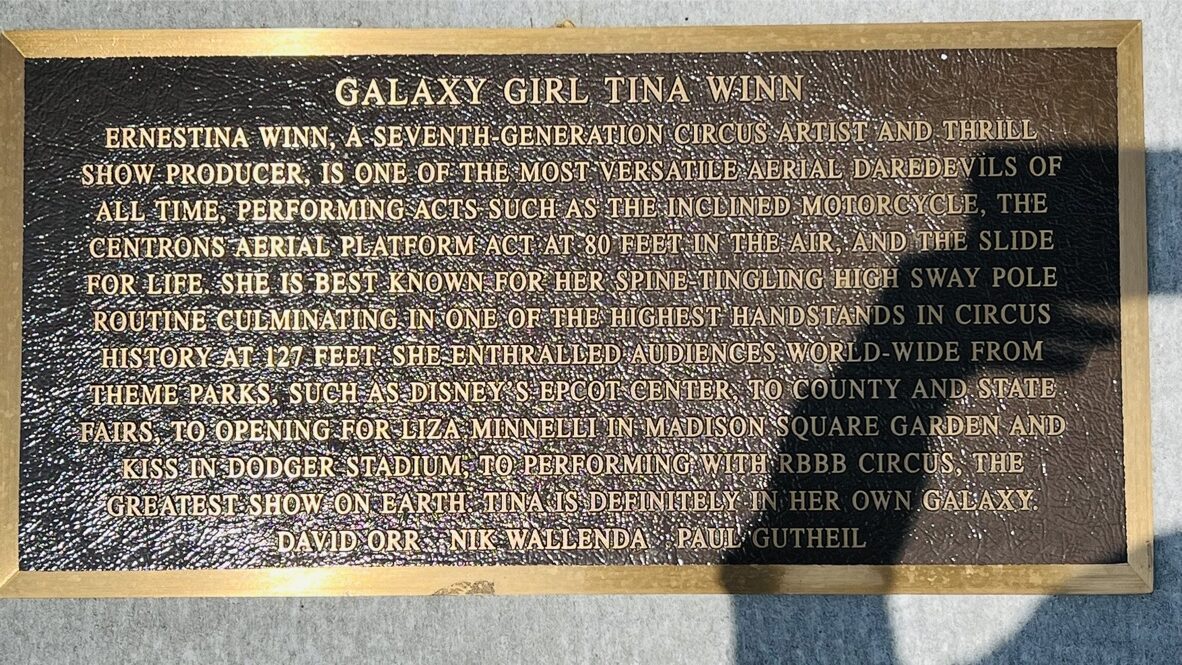 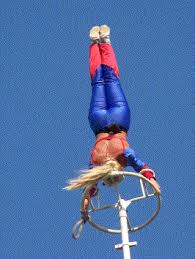 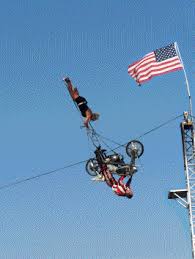 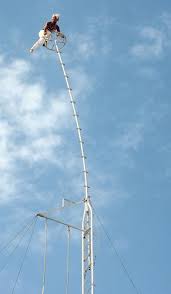 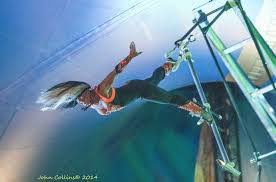 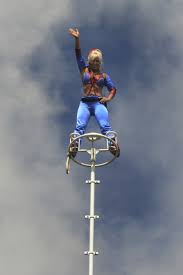 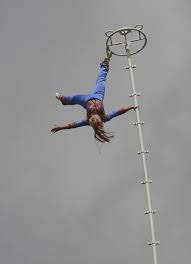 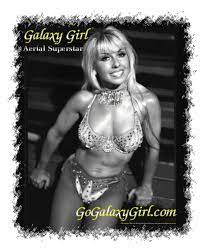 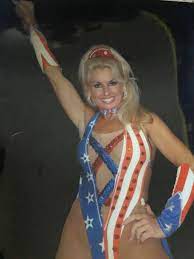 In real life, Tina Winn is a wife and mother, with all the everyday concerns that go with those roles.
But when she goes to work, Tina Winn is transformed into Galaxy Girl, billed as “America’s newest real-life super-hero.”
Her job? “Risking life and limb for your entertainment.”

That part of the spiel isn’t just hyperbole. As the star attraction of Winns’ Galaxy of Thrills, Galaxy Girl performs acrobatics and aerial gymnastics up to 127 feet above the ground — with no net, no harness, no safety apparatus whatever.
Tina Winn wasn’t born with super powers. Her act is founded on decades of practice and training. At 40, she also does 300 sit-ups every night. She walks every day, and any day she doesn’t have a show, she runs four miles.

All of 5 feet tall with long blond hair, Galaxy Girl is a neat little package of glamour and muscles.
In other words, by the standards of the circus folk from whom she is sprung, our superhero is just an old-fashioned girl.

Winn’s family has produced seven generations of circus performers. Her great-great-great-grandparents performed in England for Queen Victoria. Winn has been performing since age 3, including stints as an aerialist with Ringling Bros. and Barnum & Bailey Circus, and at Disney World.

John Winn, Galaxy Girl’s husband and co-star, has a similar background in motorcycle stunts and thrill shows. The two met when both were with Garden Brothers Circus in Canada; her family had an equestrian act and his was doing motorcycle stunts on a high wire.

The Winns’ daughter, Ashley, has also been performing since she was 4. Now 18, she appears with the Galaxy of Thrills in an act called Hula Hoop Madness.
“When you grow up as a circus performer, you learn all kinds of different skills,” Tina Winn said Monday between performances at the Allen County Fair, listing off a résumé that includes juggling, riding a unicycle and performing on trampoline.

“Since I was a little girl I always played on the trapeze. That’s like my favorite thing: I always wanted to be on the trapeze.”
Today, her trapeze is 90 feet up. She hangs by her knees, then by one knee. Later, John drives his Cyber Cycle around an elevated track while his wife, suspended from a trapeze attached to the cycle, hangs by her neck, then by her feet.

The most difficult part of the act, she said, is when she simply stands up atop the 127-foot sway pole. The most dan-gerous might be when she does a handstand up there, on a platform about the size and configuration of a steering wheel.

At that moment, John Winn said, “If the wind hits you wrong, you go over forward and there’s no return. You’re done.”
Tina Winn knows the danger. Galaxy Girl was born five years ago. Like many aerial acts, hers was worked out in her back yard, starting a few feet off the ground. Winn had worked as much as 80 feet above the ground, but she recog-nized that she was taking her game to a whole new level.

When the pole was first raised to its full 127-foot height, she said, “It took me two weeks just to climb up there and sit on top of it.”
Up there, she has learned to feel the wind, to know when it’s too strong. Last weekend, she cut the handstand out of one performance and had two others rained out when passing thunderstorms turned her high pole into a lightning rod.

But in the tradition of her profession, she always wants to perform. Her strongest urge is to push the limits. During Monday’s second show, she waited several minutes on the platform, stretching out the scripted banter with her hus-band down below while the pole swayed and she tried to sense a break in the wind.
The pole never entirely stopped swaying. But eventually she gripped the rim of the platform, put her head down, and slowly, gradually, extended her arms and then her legs into a full headstand.

There is only one word for such a performance: heroic.