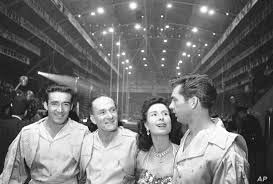 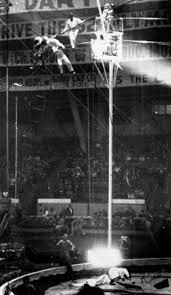 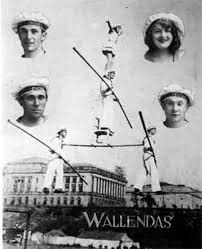 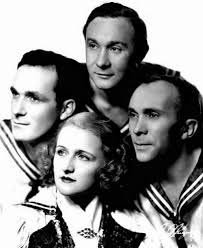 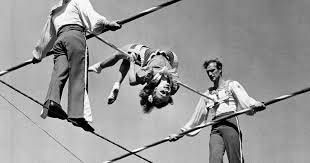 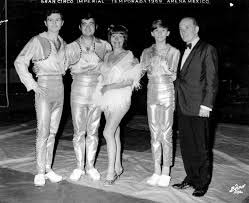 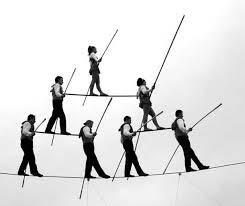 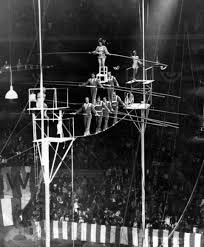 The Flying Wallendas From Wikipedia, the free encyclopedia

The Flying Wallendas
is the name of a circus act and daredevil stunt performers , most known for
performing highwire acts without a safety net. They were first known as The
Great Wallendas , but the current name was coined by the press in the 1940s
and has stayed since. History Carla Wallenda, Karl Wallenda, Raymond Chitty,
and Richard Guzman (Carla’s husband), c.  1965 Karl

Wallenda was
born in Magdeburg , Germany , in 1905 to an old circus family, and began
performing at the age of six. While still in his teens he answered an ad for
a “hand balancer with courage”. His employer, Louis Weitzman,
taught him the trade. In 1922, Karl put together his own act with his brother
Herman, Joseph Geiger, and a teenage girl, Helen Kreis, who eventually became
his wife. The act toured Europe for several years, performing some amazing
stunts. When John Ringling saw them perform in Cuba , he quickly hired them
to perform at the Ringling Brothers and Barnum & Bailey Circus .

In 1928, they debuted at the Madison Square Garden . The act performed without a
net (it had been lost in transit) and the crowd gave them a standing ovation.
In 1944, while the Wallendas were performing in Hartford, Connecticut , a
circus fire broke out, killing over 168 people . None of the Wallendas were
hurt.

In the following years, Karl developed some of their most impressive
acts, such as the seven-person chair pyramid. They continued performing those
acts until January 30, 1962 when, while performing at the Shrine Circus at
Detroit ‘s State Fair Coliseum , the front man on the wire (Dieter Schepp)
faltered and the pyramid collapsed. Three men fell to the ground, killing
Richard Faughnan, Wallenda’s son-in-law; and nephew Dieter Schepp. Karl
injured his pelvis, and his adopted son, Mario , was paralyzed from the waist
down. [1] Dieter’s sister Jana Schepp let go of the wire to fall into the
quickly-raised safety net, but bounced off and suffered a head injury.

Other tragedies include when Wallenda’s sister-in-law, Rietta, fell to her death in
1963, and his son-in-law Richard (“Chico”) Guzman was killed in
1972 after touching a live electric wire while holding part of the metal rigging.
Nonetheless, Karl decided to go on. He repeated the pyramid act in 1963 and
1977. Karl continued performing with a smaller group, and doing solo acts.
Karl Wallenda crossed the Tallulah Gorge in Georgia on a high wire on July
18, 1970.

On March 22, 1978, during a promotional walk in San Juan , Puerto
Rico , Karl Wallenda fell from the wire and died. It was between the towers
of Condado Plaza Hotel, one hundred feet high. He was 73.

[3] On October 15, 2008, Nik broke the
world record for the highest and longest bike ride on a high wire live on NBC
‘s Today . [5] Nik Wallenda became the first aerialist to walk directly over
Niagara Falls on June 15, 2012, from the United States into Canada. Wearing a
safety harness as required by ABC television , he crossed at the river’s
widest point. [6] Nik Wallenda is the first aerialist to walk over the Little
Colorado River Gorge at the Grand Canyon . The event was broadcast live on
the Discovery Channel . He used a 2-inch wire and made the journey without a
harness or safety net. The canyon is 1,400 feet (430 m) wide and
1,500 feet (460 m) deep.

[7] There are several branches of the
Wallendas performing today, comprising mostly grandchildren of Karl Wallenda
. They still perform regularly and have achieved recognition in the Guinness
Book of Records . On November 2, 2014, Nik successfully crossed between two
Chicago skyscrapers, the west tower of Marina City and the Leo Burnett
Building. After accomplishing this feat, he successfully crossed the two
towers of Marina City while wearing a blindfold in cold conditions with
strong winds. He set two world records, one for the highest incline, 19
degrees, between the west tower and the Leo Burnett building and one for the
highest blindfolded wire walk between the two towers of Marina City. Both
crossings were broadcast live on Discovery Channel .

In February 2017, a
rehearsal of the troupe’s eight-person pyramid highwire act for Circus
Sarasota (an attempt at a new Guinness World Record for height) turned awry
when the pyramid collapsed, plummeting five of the performers to the ground
while three others, including Nik Wallenda, managed to cling to the wire.
Miraculously no one was killed, but all five performers were severely
injured: Nik’s sister Lijana Wallenda suffered the worst injuries, breaking
nearly every bone in her face. [8] Nik and Lijana became the first
individuals to successfully cross New York’s Time Square on a tightrope 25
stories above street level on June 23, 2019. [9] The duo crossed from
opposite ends of the wire, which measured 1300 feet (396 meters) long and was
suspended between 1 Times Square and 2 Times Square. [9] The stunt was
broadcast live on ABC [10] and marked Lijana’s return to live performance
since her accident. [11] For the stunt, both Wallendas used safety harnesses,
despite the family’s long-standing objection to the use of safety devices. In
contrast to his statements during his Niagara Falls walk, Nik Wallenda
admitted he felt the use of a harness was important for Lijana’s first
highwire walk since her fall.

[12] Notable family members Karl Wallenda (21
January 1905 – 22 March 1978) was the founder and leader of the
group until he fell to his death in 1978. He was 73. In popular culture In
1978, The Great Wallendas , a made-for-TV movie about the family, aired. [13]
In 1983, on the Family Ties episode titled “Margin of Error” when
Steve confronts Alex about spending his father’s money on stocks, he tells
him he’s a high school student, not a “Flying Wallenda”. On the
November 17, 1997, episode of Everybody Loves Raymond , Frank says that he
doesn’t give a “Flying Wallenda”, about a fish that Ray bought for
him. In August 2003, on the 8th episode of Sex and the City ‘ s 6th season,
Stanford teases Carrie by comparing a piece she’s writing about the flying
trapeze to “her days as a Flying Wallenda.”

In 2004, the
Flatlanders album Wheels of Fortune included the Joe Ely song “Indian
Cowboy”, previously recorded by Guy Clark, Tom Russell, Townes van
Zandt, and Kathy Moffett; the song opens with the line “If you ever out
to the circus, where the Wallendas walk on the wire”. In December 2008,
TLC aired a one-hour documentary about Tino and the Wallenda family produced
by Jen Stocks for Figure 8 Films. In 2010, alternative country band Drive-By
Truckers recorded a song, “The Flying Wallendas”, about the
high-wire circus act. It appears on their album The Big To-Do . [14] The
Flying Wallendas mentioned in Dead Like Me – “Send in the
Clown”

(25 July 2004) Rietta Wallenda’s death is referenced in Mad Men
Season 3, Episode 2. In a Days of Our Lives episode that aired on July 26, 2012,
Nicole Walker quips that she doesn’t give a “Flying Wallenda” what
Victor Kiriakis thinks, a reference to the circus act. Electronic producer
Andrew Weatherall wrote the song “Let’s Do The 7 Again” from his
album A Pox on the Pioneers about the Wallendas’ tragic attempt at the
seven-person high-wire pyramid in 1962, and their triumph at succeeding when
trying again in 2008.

The Legendary Buck 65 details the family’s story in a
track about The Flying Wallendas on his free, 3-album Dirtbike project. The
Wallendas were mentioned in the 2013 film The Wolf of Wall Street . In 2014,
The Wallendas were referenced in “Tibetan Peach Pie”, a collection
of autobiographical accounts by Tom Robhins. The Wallendas are mentioned a few
times in “The Book of Speculation” by Erika Swyler published in
2015. On June 21, 2017, Steve Harvey ‘s show Little Big Shots: Forever Young
featuring former wunderkinds (a spinoff of his show Little Big Shots ) aired
its first episode. One person featured was Carla Wallenda (at the age of 81),
who climbed a wobbly pole and did stunts while suspended far above the
ground.

Major League Baseball catchers Bengie , Jose , and Yadier Molina ,
who are all brothers, are known collectively as “The Catching
Molinas” – a play on the Flying Wallendas’ name. In 1979, fantasy author
Marion Zimmer Bradley released the novel ” The Catch Trap “, which
many believed was loosely based upon the history of the Wallenda
family.