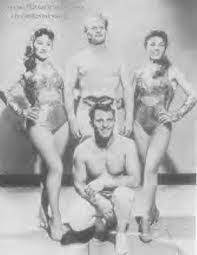 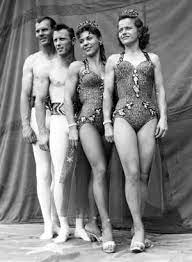 Reggie Armor (1929-2010) was one of the great flyers of the 1960s
and 1970s, a triple somersaulter at a time when only a few flying
trapeze artists were able to master the triple somersault from
the fly-bar to the catcher. He later created an
aerial thrill act, which he performed until his retirement in 1978,
due to an accident during a show.

Reginald C. Armor was born October 25, 1929 in Los Angeles,
California, to a family that had no connection with the circus world. In his
teens, young Reggie learned acrobatics on the famous “Muscle Beach”
at Santa Monica, California and decided to make a living as an acrobat. He
first joined the Dewayne
Troupe, with which he worked in both a teeterboard act
and a risley act, and then participated in a few other acrobatic
acts.

But Armor had an ambition: to become a flyer, like his
role model, the great triple-somersaulter Fay
Alexander. Reggie eventually made his debut on the flying
trapeze in 1954, as age twenty-five—which was rather
late—and teamed up with Muscle Beach fellow alumnus Bob
Yerkes in an act that became known as the Flying
Artons

The act was composed of Bob Yerkes, who was the catcher,
his wife, Dorothy, and Reggie and his wife, Bonnie,
née Cristiani—a
member of the famous Italian family of equestrians, whom he had met on Muscle
Beach in the early 1950s. Between circus contracts, Bob and Reggie performed
movie stunts in Hollywood; Reggie appeared notably in Michael
Todd’s award-winning movie, Around The World In
Eighty Days (1956).

At five feet seven inches (1.72 meters), Reggie was rather tall
for a flyer; yet in 1962, Yerkes caught Reggie’s first
triple—a trick Reggie Armor would perform
regularly with a success rate of more than 90%. In short order, The Flying
Artons became a star act; Reggie was sometimes compared to the
legendary Alfredo
Codona, and he and his partners were featured in all major American
circuses, and on television on ABC’s Hollywood
Palace in 1956.

After a long association, Bob Yerkes and Reggie Armor eventually
parted ways, and Reggie continued with his own act, the Flying Armors, which
included his daughter, SaSa Armor. The Flying Armors appeared in England, on
Thames
Television’s Hippodrome (1966),
and are one of the acts featured in Gilbert Gates’s circus
documentary, Rings Around The
World (released in 1966).

When Reggie retired from flying, he and his daughter created an
aerial thrill act, with a rotating contraption that included a
motorcycle Reggie rode on a small circular wooden platform up in the air. In
1978, while they were performing their act for the last time, outdoors at a
church benefit fair, the carabiner holding Reggie’s safety
belt broke, and he fell sixty feet to the concrete walkway below. He was
severely injured and had to undergo no less than six surgeries that kept him
hospitalized for several months.

That was the end of Reggie Armor’s performing career. He
continued to work in a circus management capacity and as an event promoter.
Reggie and Bonnie eventually retired, and they left Sarasota, Florida, home
of many circus families, to settle in Tulsa, Oklahoma. Reggie and Bonnie
Armor had three children, Jay, SaSa and Reginald III. Jay, the oldest, worked
as a clown in the trampoline act the family performed in addition to other
acts; he was tragically killed in a random shooting in a bar on New Year’s
Eve 1975, at age 21.

For a video of Reggie Armor: