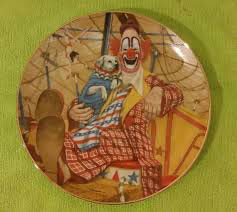 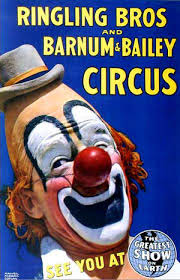 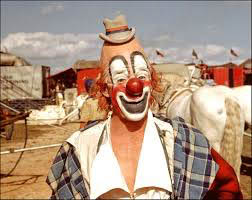 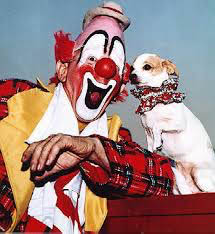 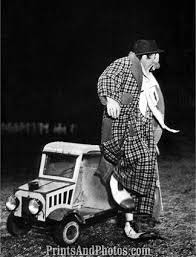 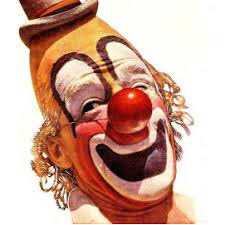 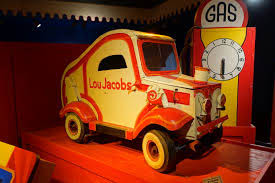 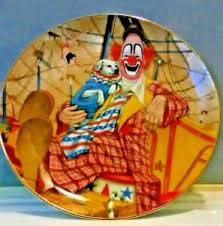 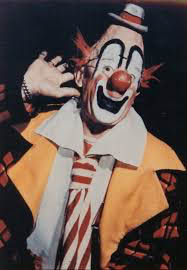 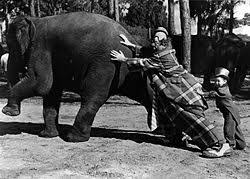 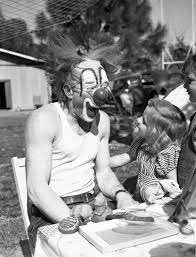 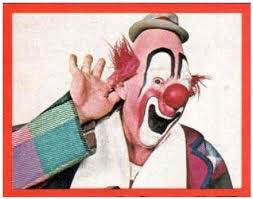 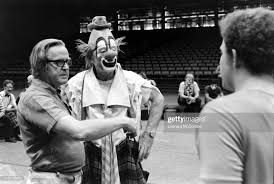 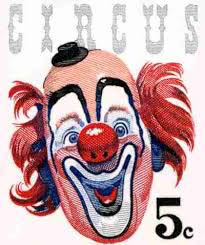 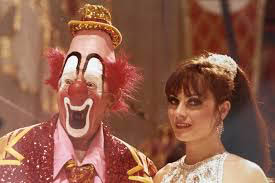 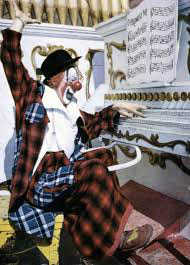 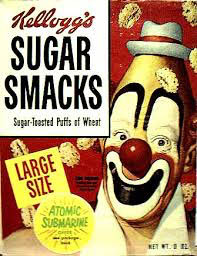 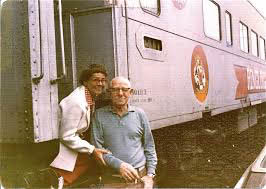 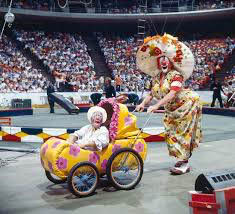 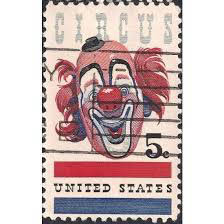 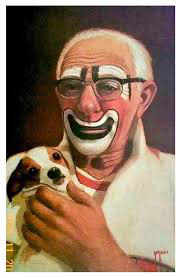 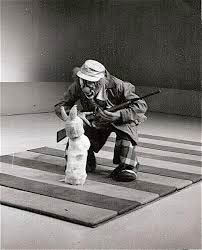 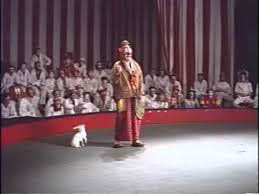 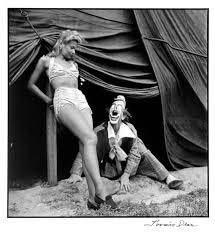 By Dominique Jando One of the most recognizable clowns in recent circus history,
Lou Jacobs’s career spanned 62 years, 60 of which he spent with Ringling
Bros. and Barnum & Bailey . Jacobs (1902-1992) was born Johann Ludwig
Jacob in 1903 in Bremerhaven, the seaport of the city of Bremen, Germany,
where his father worked in a shipyard. Until the outbreak of WWII, Germany
was the epicenter of Europe’s circus and variety shows, and Jacobs’s parents
created a song-and-dance act which they performed in local
“varieté” theaters. At school, young Ludwig demonstrated
great skill in gymnastics. Moreover, he had a taste for show business.
Following WWI, his father began to train him in basic acrobatics,
barrel-jumping (a specialty rarely seen today, but quite popular then,
especially in Germany and Russia), and—since Ludwig had a natural
ability for it—contortion. By then, Jacobs had already made his
debut in show business: in 1910, at age seven, he appeared on stage as the
rear end of an alligator, a costume whose front end was animated by his elder
brother, Karl. Lou in America The economic situation in Germany was abysmal
after the first World War. In 1923, Jacobs followed his brother to the United
States. There, he found employment as an acrobat, working with a
father-and-son comedy acrobatic act in which he played the straight man.
Then, in late 1924, he teamed up in another comedy act with a contortionist
named Davis, who had signed a contract with Ringling Bros. and Barnum
& Bailey Circus for the 1925 season. Jacobs, who had by then
Anglicized his name to Lou, made his debut with The Greatest Show On Earth in
1925. There he discovered that his vocation was clowning. In 1926, he became
one of the dozens of clowns appearing in the show. Jacobs found himself in
good company: among the other clowns was Felix Adler . (Later, Jacobs would
be joined in the show by another great German-born clown, Otto Griebling ,
and by Emmett Kelly .) Jacobs’s makeup was inspired by Albert Fratellini, one
of the celebrated Fratellinis . A trio of extremely talented clowns, the
Fratellinis were among Europe’s greatest circus stars. Originally, Jacobs
applied his makeup on a white base (which explains why, in many circus
writings, he is often referred to as a “whiteface” clown). In later
years, however, his makeup became closer to the Fratellini original, with a
flesh-colored base. His distinctive and efficient makeup, along with Jacobs’s
oversized and colorful costume (which he wore over his 6’11” frame) made
him easily recognizable in the vast expanses of the Ringling’s giant big top
(and later, in sport arenas). Jacobs’s clown face eventually became an iconic
image for Ringling Bros. and Barnum & Bailey’s advertising; in 1966,
it even appeared on a U.S. postage stamp celebrating the circus. Unlike many
of his fellow clowns, Jacobs’s created his own gags, for which he had an
unbridled imagination. He can be seen in Cecil B. DeMille’s film The Greatest
Show On Earth (1952), parading on the hippodrome track in his famous
self-propelled bathtub. For the same movie, Jacobs helped Jimmy Stewart
develop his character of Buttons the Clown. Jacobs’s two best-remembered
routines were a hunting scene in which his chihuahua, Knucklehead (later
replaced by PeeWee), played a mischievous rabbit, and the 2×3-foot midget car
into which the former contortionist squeezed all of his 6’1″ body.
Jacobs married Jean Rockwell, a former Ringling showgirl, in 1953. They had
two daughters: Lou Ann , who became an aerialist and an elephant trainer, and
Dolly Jean , an aerialist who became one of America’s greatest circus stars,
eventually creating Circus Sarasota with her husband, Pedro Reis . At the end
of the 1985 season, Jacobs retired from performing. He was then 82 years old,
and his health was beginning to fail. He remained active, however. He had
been a Master Teacher at Ringling Bros. and Barnum & Bailey Clown
College since its inception in 1968, and he held the position until 1991. He
was, by all accounts, the College’s most revered faculty member for all of
the twenty-three years he taught there. In 1987, Kenneth Feld presented
Jacobs with a Lifetime Achievement Award on behalf of Ringling Bros. and
Barnum & Bailey Circus. The following year, Jacobs saw his star on
Sarasota’s Circus Ring of Fame on St. Armands Circle unveiled. In 1989, he
was inducted into both the Circus Hall of Fame in Peru, Indiana, and the
newly formed Clown Hall of Fame in Delavan, Wisconsin. Lou Jacobs died of
heart failure on September 13, 1992, in his hometown of Sarasota, Florida. He
was 89 years old. In 2013, his native city of Bremerhaven, in Germany,
recognized him on its website with a special tribute .