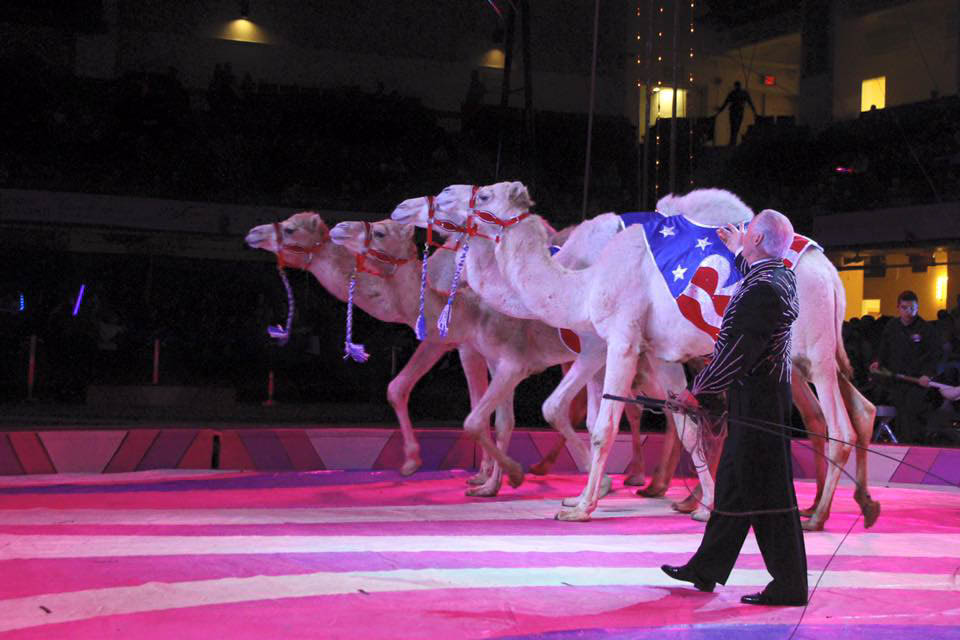 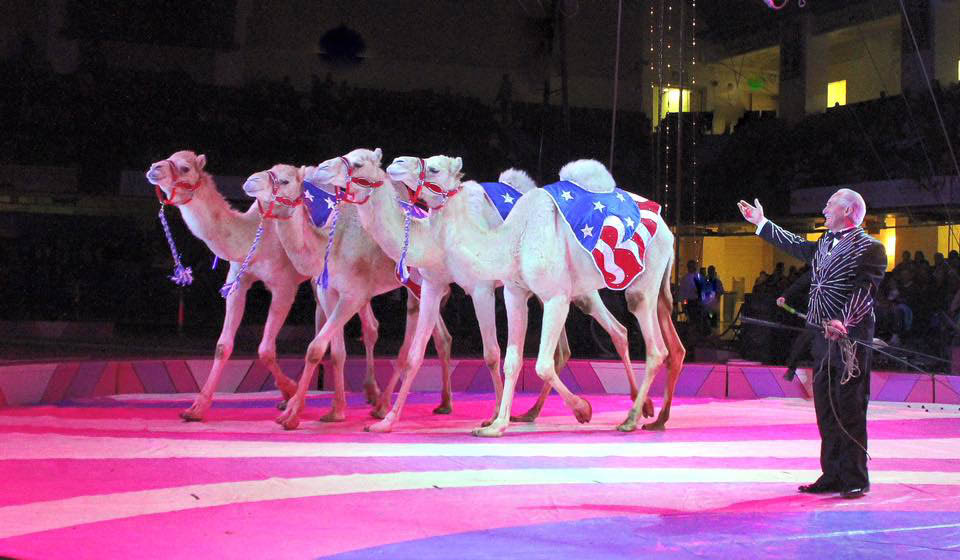 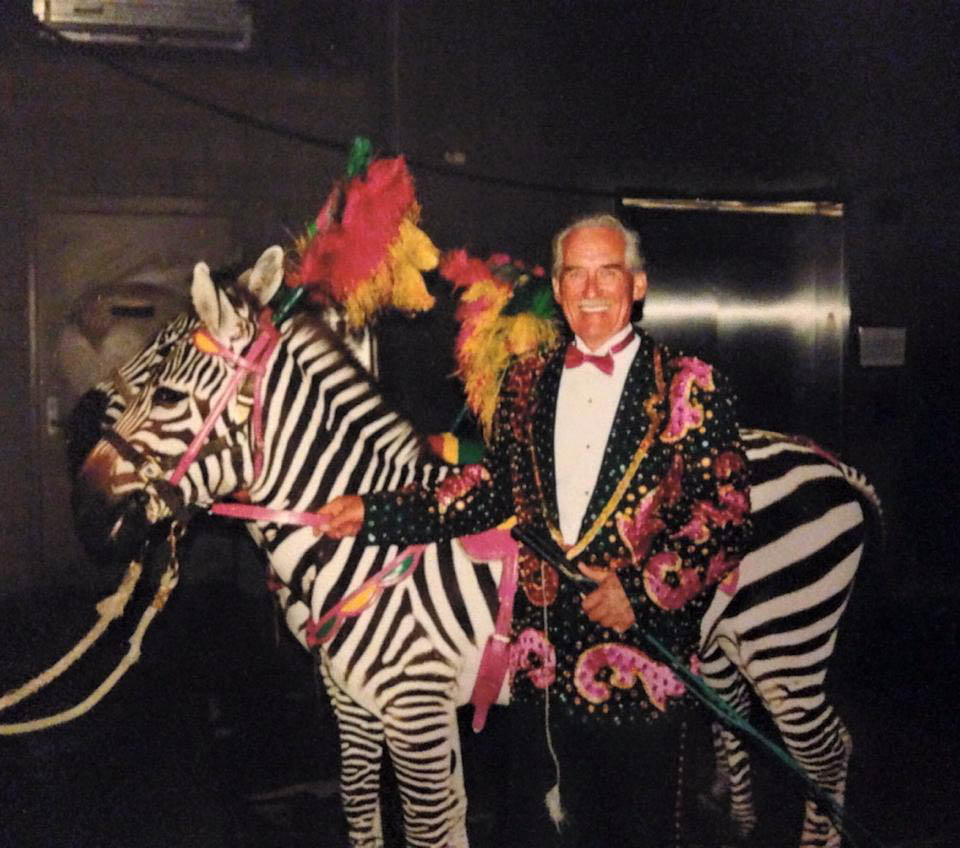 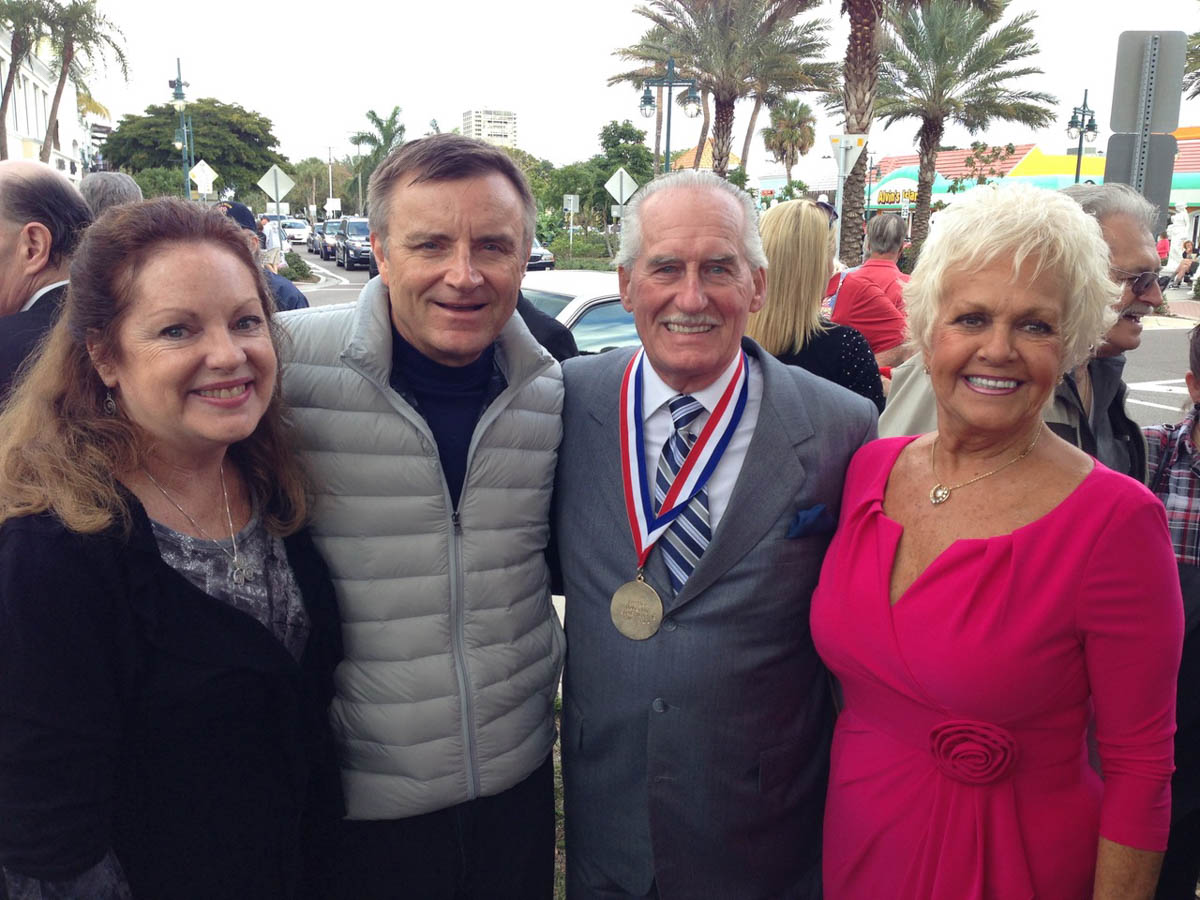 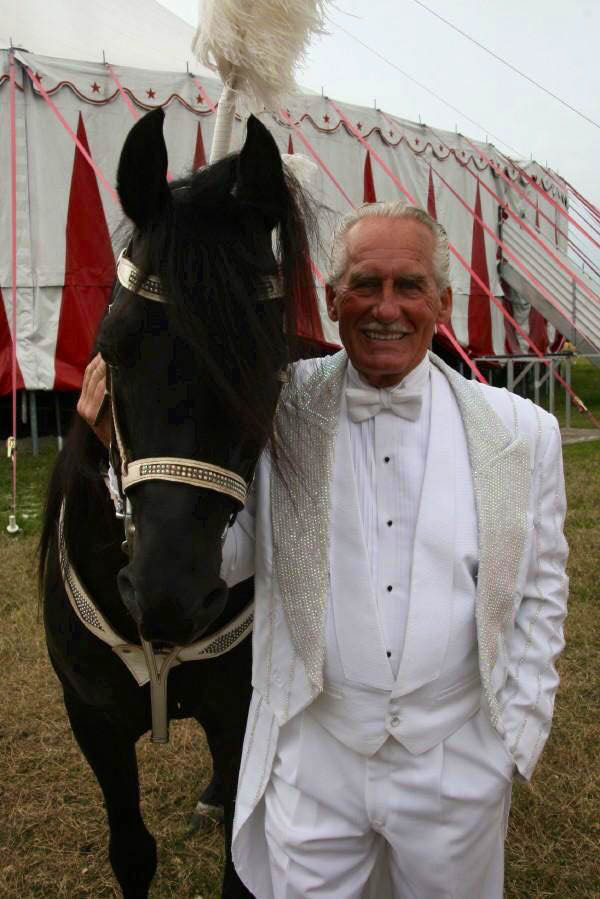 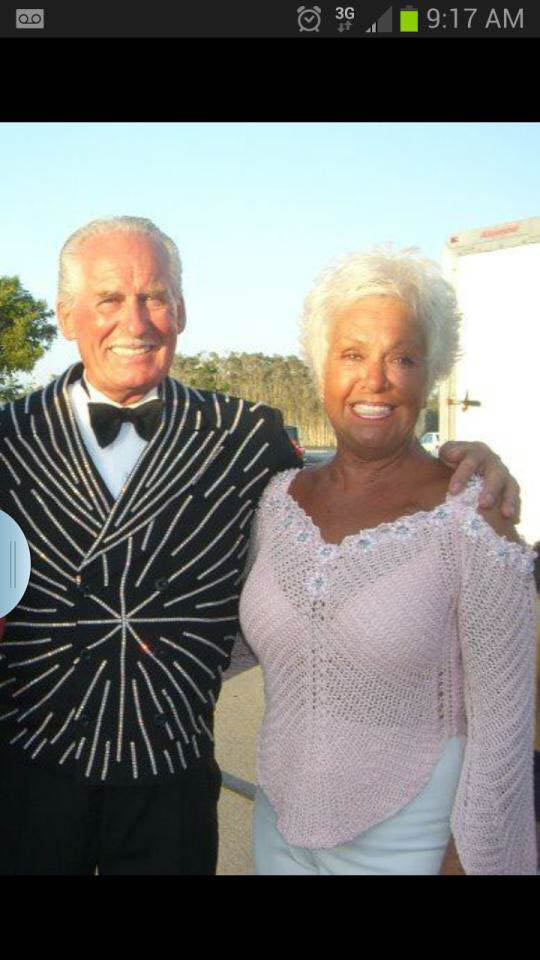 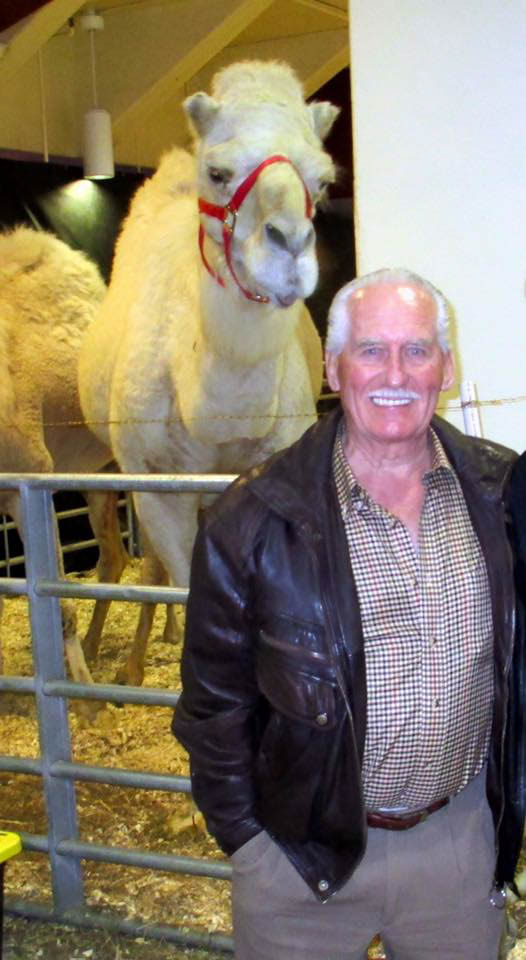 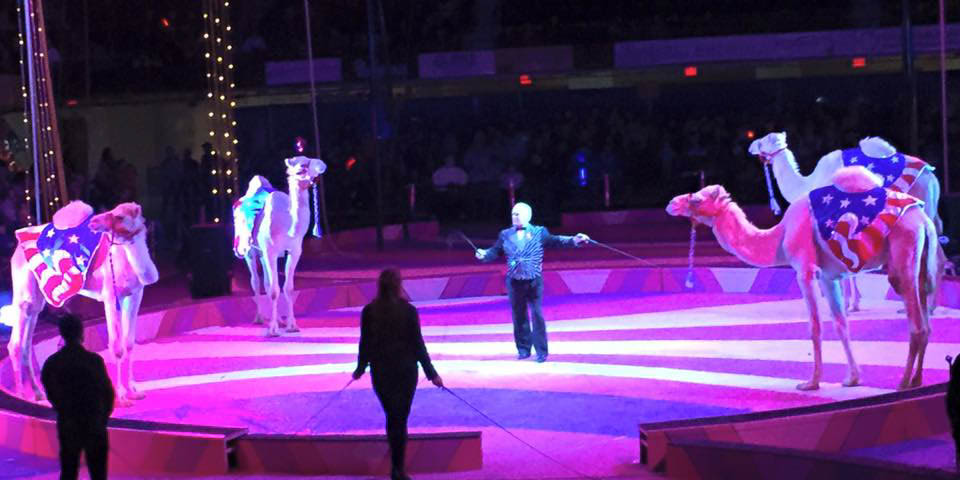 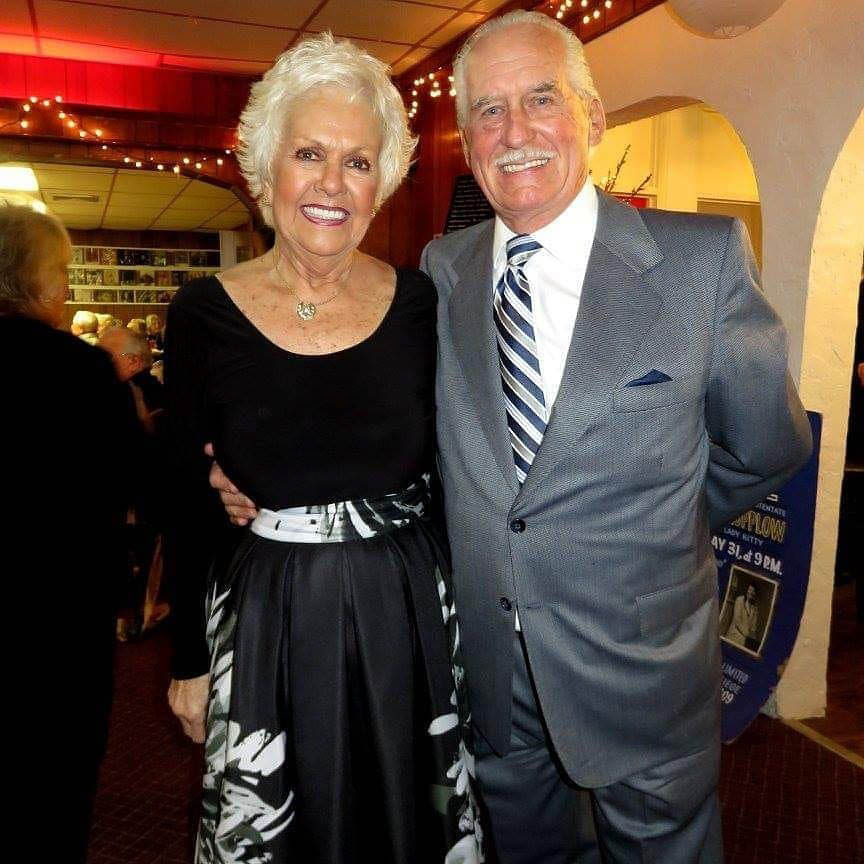 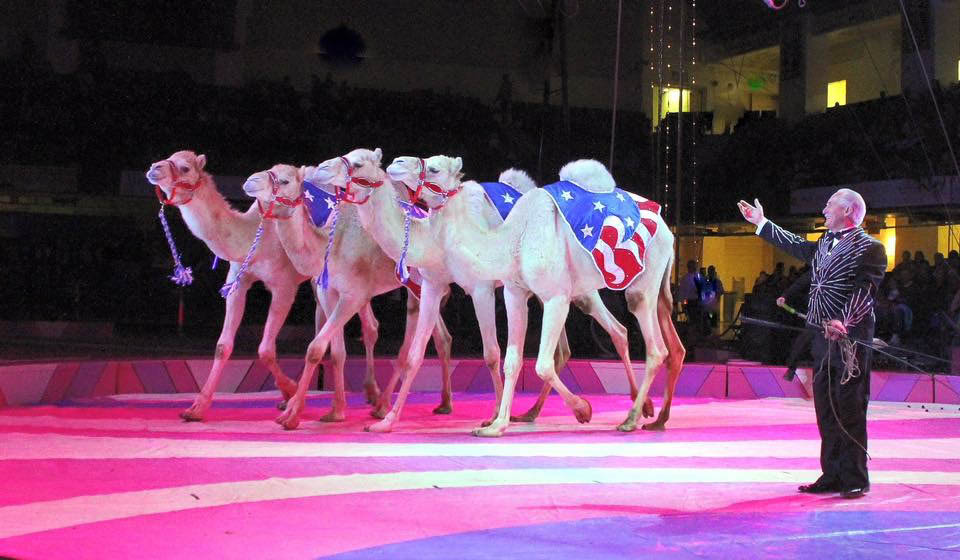 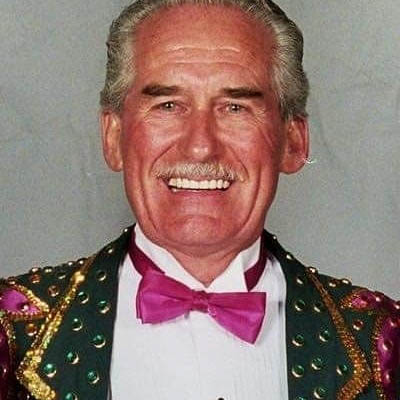 The passion to entertain lies deep in the roots of the Garden
family. Ian’s father William was born in Scotland in the little
town of Buckie. He eventually met Jean Shaw of Glasgow and they were later
married. William and Jean migrated to North America to become Garden
& Shaw, a song and dance act. William then formed Garden Brothers
Amusements.

The couple had five children: Bill, George, the twins-Dick and
Kandy, and Ian in 1933. Ian started training animals at age 14. He worked at
a riding stable as a kid and his interest in horses was sparked. He also got
a job exercising high energy steeds at a local racetrack. The balance of the
time he was training his own animals: a dance horse, dogs, and a rhesus monkey.

In later years Ian would be called the “Fairy Dust
Trainer” as he had the ability to break (train) any animal to
respond to voice and hand commands and have them ready to perform in as
little as three months. Who among us hasn’t described our lives at
one point or another as a 3-ring circus? A term that brings to mind too much
to do and too little time to do it. Juggling work, family, and personal
obligations, praying not to drop any of those balls that will cause our world
to spin into absolute chaos.

I recently had the chance to visit with local
Jean Garden, the daughter of Ian and Micheline Garden of the world-renowned
Garden Brothers Circus. Her parents are considered “Circus
Royalty” in the business. Although there are many moving parts and
people involved in running a circus, Jean was clear that vision, planning,
and having the right professionals passionate about what they do was and
continues to be the key to Garden Brothers’ success.

In North
America, there are two circuses that set the standard for excellence for the
industry. Garden Brothers Circus of Canada and Ringling Brothers and Barnum
& Bailey in the United States. Ringling Brothers closed their big top
show in January of 2017 after 146 years. Garden Brothers continue to operate
today in the same grand fashion with performances not only in the US and
Canada but around the world. The Ian Garden story is a rag to riches story
similar to the one told of P.T. Barnum in the blockbuster movie, The Greatest
Showman. But before we can go forward, we need to go back. In the early
’50s Ian was off to Montreal with his animal act to work the
nightclub scene and his show was in high demand. He continued to operate the
nightclubs, including the famous Mocambo Club in Hollywood, CA that was
frequented by many stars for the silver screen like Humphrey Bogart and
Elizabeth Taylor. Ian was performing on the same stage as the likes of Ella
Fitzgerald and Frank Sinatra! If you’re not familiar with the
Macambo, its main stage was replicated to be the
“Tropicana” Club on the “I Love Lucy”
show.

It was these years that Ian met a beautiful singer working on the same
bill, Micheline. She only spoke French, and he only spoke English, but love
would eventually find a way. In 1956 Ian returned to Montreal and formed the
Royal Brothers Circus with his brother, Bill. They needed initial operating
capital, so Bill took out an ad in the Toronto Globe and Mail looking for an
Angel investor and found one. With $2,000 Royal Brothers were on the road.
Ian ran the animals, and Bill ran the show.

The tour by Jean’s
description was “… a disaster and the season closed
early. In the late 50’s dad did a series of shows with Bill, but
none ever came to fruition.” Ian wasn’t the type to give
up though. In 1959 he married that beautiful French girl, Micheline.
“His real success came when he returned to Montreal to stay. He
spent the majority of his time developing telemarketing for the show and
personally handled every event he booked, which would lead to a single,
highly successful date in Montreal for the circus. This was essentially the
rebirth of Garden Brothers Circus”, Jean told me. In 1961 Ian and
Micheline’s son Richard was born. In 1962 a second son, Ian Jr. And
in 1963 the Garden’s daughter Jean graced the scene. By 1968 the circus
was in full tour mode, and it was truly a family affair. Ian Sr. was not only
the owner and trainer but the Showman and Ringmaster as well, directing every
facet under the Big Top. Micheline handled all the production numbers from
music to choreography.

The children played an active part in the day to day
operations of the circus, whether it was caring for the animals, performing,
working the concessions or helping with staging, rigging, and
production—all this and still keeping up with their education by
correspondence courses.

After nearly 30 years Ian and
Micheline—referred to as the King and Queen of the Garden Brothers
Circus—passed the baton to their sons. Richard, the oldest, worked
behind the scenes acting as the General Manager handling the business aspects
of bookings and promotions. The talents of Ian Jr. didn’t fall far
from the tree. He performed as Showman, Ringmaster, Trainer, and handled the
day-to-day operations when the circus was on the road. Garden Brothers Circus
has since been taken over by a cousin and is still going strong today with
both Canadian and US tours.

A circus that started with a dream and a $2,000
investment of Angel investors continues to be a multi-million dollar-a-year
legacy of primarily one man—Ian Garden Sr. His daughter calls him a
man of honor and integrity. She shared with me, “It
wasn’t always easy. No matter how tight things were, Dad spared no
expense on the production of the shows and the performers and staff ALWAYS
got paid. It was a class show, and the people that came got their monies
worth every time. It was always the best…and Mom was the glue that
held us all together.

he gave up her own career for Dad’s.”
Ian Garden has lived an incredible life. He has been inducted in the Ring of
Fame in Sarasota, FL as the foremost animal trainer in America. He trained
the last six Bactrian camels for Ringling Brothers before they took their
tent down for the last time. He trained horses, camels, zebras, elephants,
and dogs. You can take the boy out of the circus, but I guess you can never
take the circus out of the boy!

Ian has lived in Ocala for the last 14 years,
owns a 12-acre training facility and seven-days-a week, 8-hours-a-day
continues to train Liberty Acts (horses who perform without riders or
tethers, controlled only by commands of the trainer) and still performs from
time to time. What do we have like the circus today? Something that brings
the family together. That delights children and adults alike. That creates a
memory by the sights, sounds, and smells that can be relived years later,
giving you the same feeling of excitement and joy. Hemingway said,
“The circus is the only ageless delight that you can buy for money.
Everything else is supposed to be bad for you. But the circus is good for
you. It’s the only spectacle I know that, while you watch it, gives
the quality of a truly happy dream.” Thank you, Ian and Garden
family, for those truly happy dreams created under the Big Top.