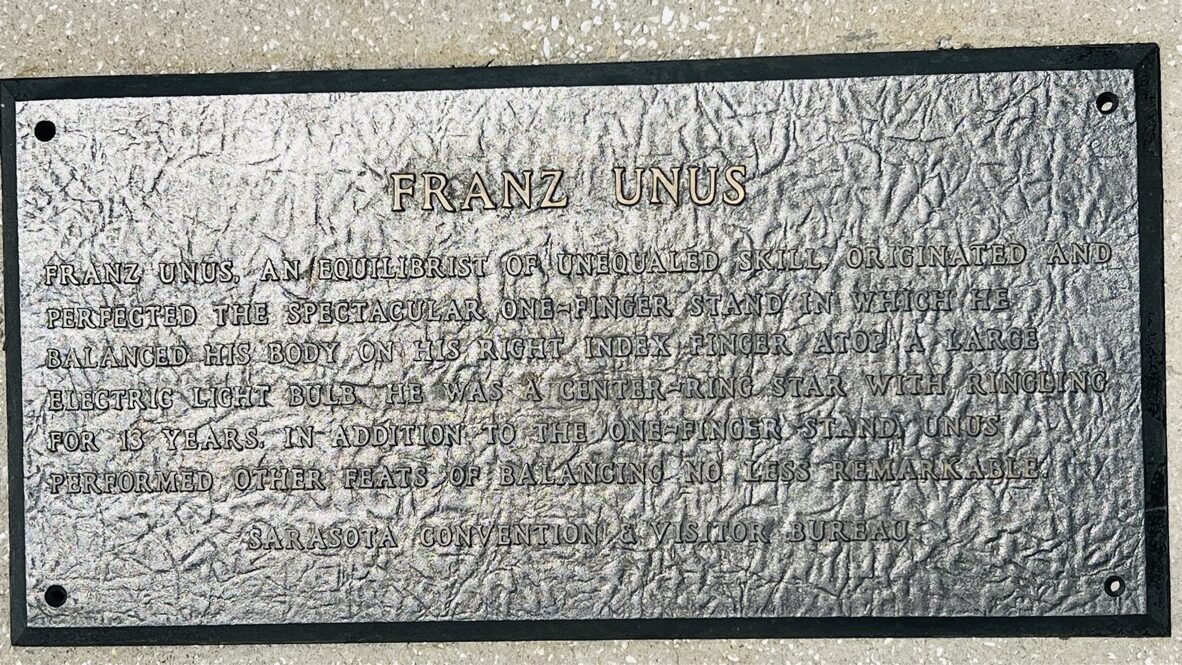 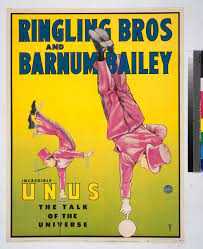 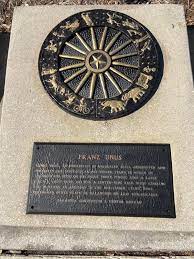 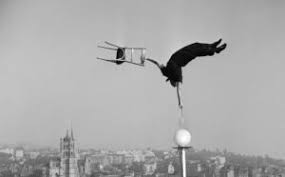 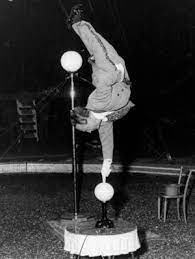 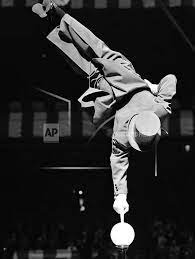 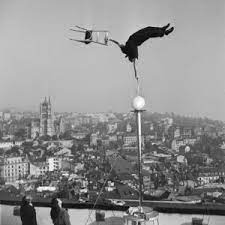 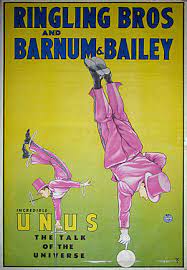 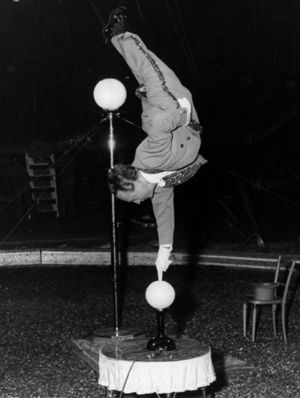 From Circopedia:
By Dominique Jando

Unus (1907-1994) was perhaps, in the mid-twentieth century, the most famous hand balancer in the circus business, thanks notably to John Ringling North, who made him a true circus star in the United States and, consequently, all over Europe. Unus was known as “The man who stands on his forefinger,” a feat he performed with outstanding and—to this day—unmatched showmanship.
From Franz Furtner To Unus
He was born Franz Furtner on October 19, 1907 in Eichgraben, a small town in the northeast of Austria. Franz didn’t belong to a circus family: He began his professional life as a carpenter. Yet over the years, he had developed a taste for acrobatics, and notably hand balancing, and he had a natural flair for performing. Soon, he realized that he could make a living just doing that.
So Franz built a hand balancing act, and under the stage name Unus (a Latin word that means “one” or “single”—and by extension, “the first” or “the only one”) made his professional debut in 1933, at age twenty-six. From the outset, he worked mostly in varieté theaters, then extremely popular in Germany and Austria; this theatrical environment helped define the look of his act—a characteristic of which was an emphasis on urbanity and elegance.

Unus’s One Finger Stand (c.1950)
Unus’s act was also spectacular. He worked in tails and top hat on high pedestals, on which he performed a variety of one-arm stands. At what point he introduced the one-finger stand is not known, but the trick, which he presented at the top of his act with great drama, became his trademark. However, Unus didn’t originate it, as has often been alleged: This privilege is generally given to the American Nelson Hall, who presented it around 1905—although the Cirque Fernando in Paris featured “Gaylord, équilibriste sur un doigt” as early as 1878.
Nonetheless, the one-finger stand was rarely seen; Unus revived it and made it popular, to the extent that after his American successes, it ceased to be a rarity in Europe. There are several ways of performing it, all of which necessitate a more or less elaborate gimmick. In the case of Unus, he concealed it in his glove; but no one better than him has been able to tease so charmingly and efficiently the audience with the obvious object of their suspicion!
Before WWII, Unus became a well-known act in Northern Europe’s huge variety and nightclub circuit. It was a more comfortable environment than the circus, and it paid better too. As an Austrian headliner, Unus also had the dubious honor to perform for the Reich Chancellor, Adolph Hitler. His rare incursions in the ring—such as at Circus Knie in 1947—happened after the War, at a time when there were practically no variety theater or nightclubs left in Germany and Austria. Since German or Austrian performers were often ostracized in countries that had been occupied by or fighting the Reich, Unus also went to work in Spain, whose Fascist regime had had strong ties with Germany before WWII and had remained more or less neutral during the conflict.
Star Of The Greatest Show On Earth
John Ringling North is said to have spotted Unus in a Spanish nightclub, but more likely, he must have seen him first at Circus Knie. According to North, Unus showed no interest in working for Ringling Bros. and Barnum & Bailey, and the first meetings he had with the hand balancer in Spain ended nowhere. To be sure, the idea of working in a three-ring traveling show that moved every day, rain or shine—not to mention living on a train—may not have been exactly the cup of tea of a well-established artist used to performing on stage in comfortable buildings, and living in hotels. Undeterred, North (or his agents) began to chase Unus across Spain, from one engagement to the other.

Unus (1948)
However the money couldn’t have been bad, especially since work in Europe in the immediate post-war era was scarce and often not very lucrative. Furtner’s wife and partner, Valentina (“Viva”) Tuerck Asgard, who took care of business, saw an opportunity to make some good money at last (they already had two young daughters, Nina and Victoria), and eventually accepted to sign an agreement with Ringling. Yet, when John North met Furtner again in Brussels some time later, he was shocked to discover that, having read his contract’s fine print, Unus didn’t want to execute it—which was easy for him to do since he had not signed it personally.
North knew how to cajole an artist when he wanted to, and he had the means to be generous if needed. Every detail of the contract was upgraded, financially and otherwise; Furtner was not only promised star treatment, he was also granted a unilateral trial period. He finally relented and signed with The Greatest Show On Earth for its 1948 season. Indeed, North knew star material when he saw it; he ordered his press department to build Unus into a center-ring star, and the circus to treat him as such.
Unus made his American debut on April 5, 1948 at Madison Square Garden in New York. He was featured on the center ring in a three-ring display of hand balancers, but the printed program was unequivocal as to who was the star act there: “Flushed with a Succession of European Triumphs, but Shy of an American Venture, Only John Ringling North’s Persuasion Brings to America for the First Time the Upside-Down-Gravity Defying, Equilibristic Wonder, the Debonair, Incredible Unus, the Man Who Walks on His Forefinger.”
He may not have “walked” on his forefinger, but he was nonetheless a sensation. Paul Binder, the founder of the Big Apple Circus, kept a vivid memory of Unus balancing on his high pedestal, singled out in the convergent rays of several spotlights, the lone focal point at the center of the vast Garden arena—a dramatic image that struck a very young Paul, and a very early circus impression that he never forgot. It was not the tricks that Binder remembered, one-finger stand or else; it was the hyped and highly theatrical presentation of Unus, the dramatic touch added by John North to an act he wanted to build up.
Life After Ringling
Unus remained with Ringling until its 1950 season and then went on to work with Shrine circuses, which were aplenty at the time, were produced in comfortable arenas, and paid well. (He had been given the status of permanent resident in 1951, and became a U.S. Citizen five years later.) In January 1953, he rejoined the Ringling organization to perform for Dwight D. Eisenhower during the presidential inauguration festivities. He returned to Ringling a few years later, when the show folded its tents and began to play in arenas. He made also several appearances on television, notably on Toast Of The Town (1956), Jackie Gleason’s All Star Circus Revue (1957), and as a mystery guest on What’s My Line (1962).
Franz Furtner retired from the ring in the early 1960s, and one of his last engagements, if not the last, was a return to the Ringling show for its ill-fated European tour of 1963. Unus, who was featured as a center-ring solo act, was one of the rare highlights of a show that, as a whole, failed to impress European audiences. That same year, his daughter Victoria made her debut with Ringling (in the United States this time) with a spectacular Roman Rings act under the name of La Toria. Vicky Unus quickly became, like her father, a headliner of The Greatest Show On Earth.
Like many American circus performers of his generation, Furtner eventually retired in Sarasota, Florida, where he had a house on DeSoto Acres, and he and his wife purchased and operated a motel. Franz Furtner, the incomparable Unus, passed away on August 22, 1994, at age eighty-seven. He had four children, Nina and Victoria, who were born in Austria, and Jennifer and Franz, Jr. In 1989 he had been inducted into Sarasota’s Circus Ring of Fame at St. Armands Circle, and in 2008 (fourteen years after his death), into the Circus Hall of Fame in Peru, Indiana.