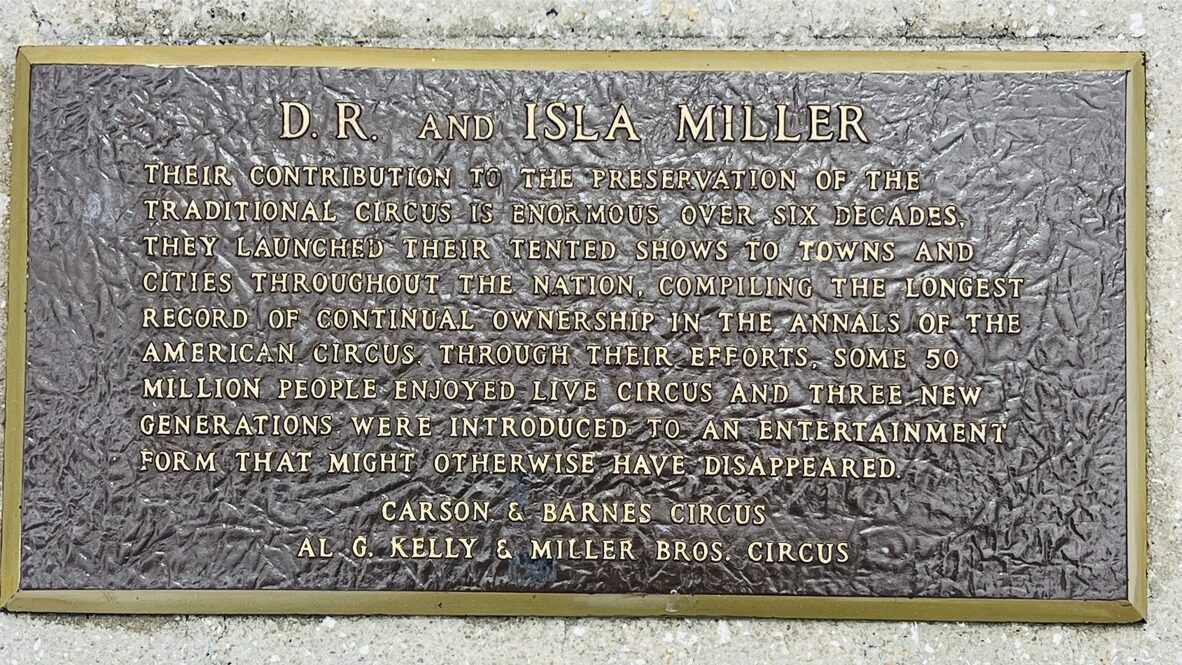 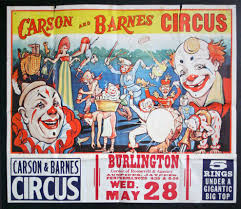 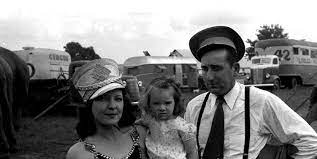 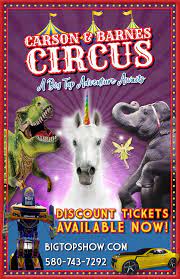 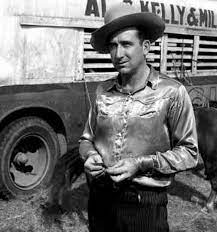 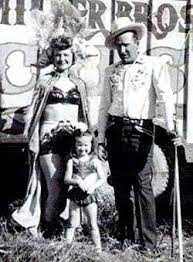 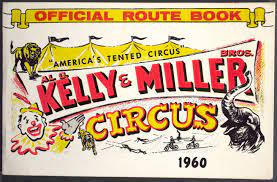 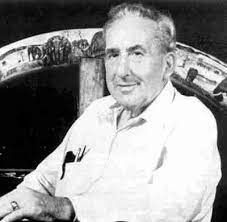 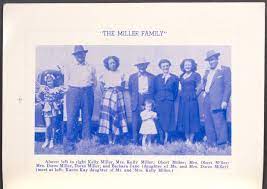 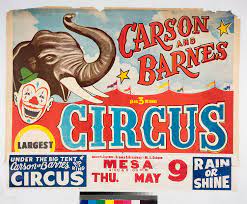 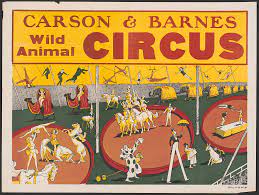 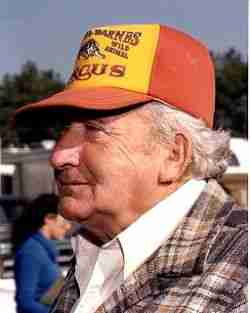 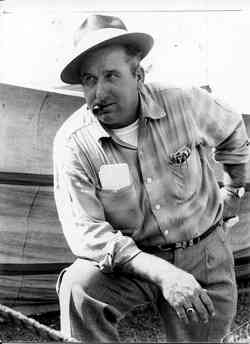 Reprinted from: The Independant

For Three generations, the Miller family have provided the smaller American townships with a taste of the old- fashioned travelling circus.

D. R. Miller followed his father into a wandering circus life, spending 75 years in the sawdust ring, more than 60 of them as a circus owner, and his daughter followed him into the business. The Carson and Barnes Five Ring Circus, billed for many years as “The World’s Largest Circus Under the Big Top”, was his life and his passion, and he became known in America as “Mr Circus”.

I want to leave a lifelong impression on each child who comes to visit my circus. The warm memories of the day spent with Mom and Dad watching the mammoth tent being pulled up by the elephants; the excitement he feels when watching the lion trainer work with the big cats; the kaleidoscope of unique smells, sounds and images of the tent circus that greets each youngster when he visits the showgrounds.

When a young person comes to the circus he is greeted by so much activity and excitement that he will never forget the experience. I remember the special wonder and joy that I felt when I saw my first circus as a child, and I want to multiply that joy. I want to be the man who brings the circus to town. It’s like playing Santa Claus every day of the year, and I will keep bringing that special joy to the kids until the day the good Lord decides that it’s time for me to stop.

Miller achieved that aim, and died on the circus lot at McCook, Nebraska, during the matinee performance of 8 September. A special service was held under the big top three days later, but the funeral has had to wait until now when the show comes off the road and returns to its home base in Hugo, Oklahoma, for him to be buried alongside his wife at Mount Olivet Cemetery.

Dores Richard Miller started his career in his father’s act in 1924, as an eight-year-old rider on a small pony. He went on to become a tightwire walker of some considerable skill, and he, his father, Obert Miller, and brother Kelly started their own show in 1937, with two monkeys, four ponies and a personnel roster of six people. Miller died with the satisfaction of seeing his biggest show of all still on the road, 43 years after the great impresario John Ringling North had declared that “the tented circus as we know it is a thing of the past”.

Miller believed that the American public still yearned for the golden days of the circus, which came to town for a day only, its tents mysteriously mushrooming early one morning, to give two performances to an incredulous audience before disappearing overnight as mysteriously as it had arrived.

More wondrous than the show itself or its sudden appearance and disappearance were the logistics behind a tour, which would involve meticulous planning for a season of one-day stands throughout 36 weeks, taking the show to 20 different states on a tour covering nearly 20,000 miles. Add to that the gruelling task of erecting and dismantling the world’s largest big top and all its accompanying equipment day in and day out for months on end, and the transportation of 25 fully grown elephants, and an assortment of lions, tigers, horses, ponies and exotic animals like giraffes, rhinos and hippopotamus. Miller was a past master at planning his tours, and ensured that no matter what obstacles stood in his way, the circus would come to town.

Miller was a fighter all his life. “When your first name is Dores,” he would relate, “you have to defend your manhood, quite often.” Throughout life he was known as Dorey, or plain D.R. Miller, and nobody would have dared call him Doris.

He liked motorcycles and bore scars to his death from one accident. While serving in the US Army in Europe during the Second World War, he was detailed to ride his bike around an area purportedly to find a trail for heavy equipment. “They actually wanted to find out where landmines had been planted,” he said afterwards, “and they knew that one man was more dispensable than several.”

Until a few years ago, he flew as a licensed aeroplane pilot. On one occasion, he had his plane serviced and the oil drain plug was left out. While he was airborne, the engine froze and twisted out of its mount, but he crash- landed and walked away unhurt. He casually rented another plane and continued his trip to Miami. “I was amazed that it flew for 20 minutes without oil,” he commented afterwards.

As a teenager, Dores was a pretty good dancer, adept at the jitterbug. At the age of 17, he met and fell in love with Isla Marie Beach, the 15- year-old daughter of a farming family, and one of 10 children. Their jitterbugging together clinched a lifelong relationship when they married at Gaylord, Kansas, and he carried her off into an uncertain life on the road. The marriage cost three dollars, but the kindly minister gave them back two as a wedding present.

Their wedding night was spent in a small, draughty tent – Isla awoke with chicken pox and the show they joined up with three days later could not afford to pay them. But they survived, joining the Herrington Nickle Plate Circus and then the Seils-Sterling Circus on near-starvation wages. Each week during those early days of marriage the biggest argument was how they would spend the 25 cents left over between them after subsistence had been paid for. Dorey would have a cigar, and Isla a Power House candy bar.

When the Millers started their own show in 1937, it was known as Miller Brothers’ Circus, but, as they prospered, the title was changed to Al G. Kelly-Miller Brothers’ Circus, later acquiring a share in other shows, including Carson and Barnes. The Kelly-Miller title was dropped in 1969 but revived by Dorey Miller in the 1980s and continues today as a second unit. At the age of 80, Miller launched another unit, a one-ring affair called the Chinese Imperial Circus. It lasted one season only, after which he switched the Chinese performers to his Carson and Barnes Five Ring Circus.

Miller’s wife Isla was known as the “First Lady of the Circus” in America, but if there was anything Miller loved almost as much as his wife it was the elephant. He had an almost child-like adulation for this symbol of the circus, which proved to be his lucky charm throughout his circus career. He bought his first elephant in 1937 and well over 200 Asiatic and African elephants went through his hands in subsequent years. Twenty to 25 elephants were always carried by the Carson and Barnes Circus during its heyday and at one time he had as many as 57 elephants, more than any other circus proprietor in the world. He established an elephant breeding facility in Texas, which he had planned to move to Hugo, Oklahama; he had moved his circus there in 1941 and it had remained his winter quarters and home to many dozens of performers.

Miller was proud that his daughter, Barbara, began performing when she was only three. His two granddaughters, Kristin and Traci, also followed him into performing and are now married to circus artistes, so the future of Carson and Barnes Five Ring Circus, the world’s largest travelling circus, looks assured.

In 2000 D.R. and Isla Miller were inducted into the International Circus Hall of Fame.