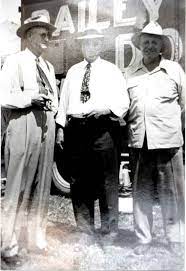 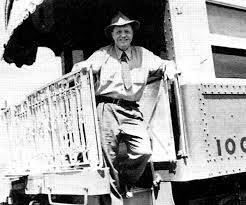 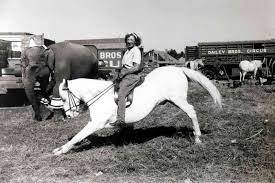 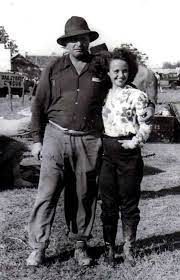 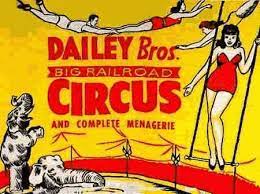 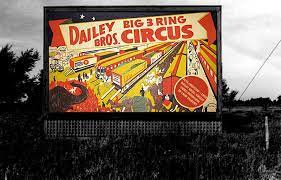 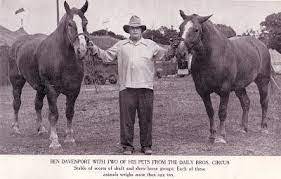 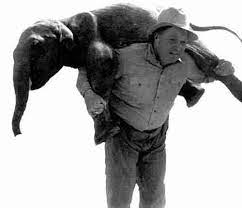 From Circuses and Sideshows website: Ben Davenport One of the most colorful
characters in the circus industry, Ben Davenport owned Dailey Bros. Circus, a
large railroad show. Information Obtained From: Bandwagon Magazine, Vol. 14,
No. 4 (Jul-Aug), 1970, pp. 4-11. Article and research By Leland L. Antes, Jr
. In the fall of 1914 a young boy arrived in Delaware, Ohio, to attend the
Methodist College, and study for the ministry. His parents, in Friendly, West
Virginia, had planned for their son a career in the Methodist Church. But one
semester was all he could take and he took off. Opening and closing in one
semester, Benjamin C. Davenport, joined out with a circus. The record is not
too clear as to which show he went, but it is thought that it was Robinson’s
Famous Shows, first in the winter quarters and then on the advance car. A few
years later he bought “the smallest horse in the world” and
exhibited it fairs and indoor circuses. The next adventure was in partnership
with Jimmy Sullivan on a carnival, where Ben framed a one ring circus for the
midway. This did not work out and the stock went back to Sullivan at the end
of the season. In 1923 Davenport went out with the LeRoy Motorized Circus,
from Fostoria, Ohio. He drove one of the seven Ford trucks. During the 1924
season he was with William Peters (Ketrow) on what was the first tour of the
Ketrow Bros. Circus . Ketrow bought an elephant from the Hall farm and after
the elephant man left Davenport took over the bull. Davenport took his
assemblage of horses, ponies, dogs and monkeys to the Lindemann Bros, four
truck Seils-Sterling Circus, out of Sheboygan, Wisconsin, in 1925. He was
just about the whole show that season, appearing in 13 of the 26 acts, and on
some days worked knives and magic in the side show. He stayed with the
Lindemanns through the 1928 season. This was his training ground for a later
career as a circus owner. For the 1929 season he moved to the “Princess
Iola’s Medicine Show”, playing week stands. Princess Iola, was actually
Miss Eva Billings, daughter of Gay Billings, who had operated “Gay’s
One-Horse Circus” out of Quincy, Illinois in the early 1900s. Princess
Iola became Mrs. Davenport and in 1931 together they took the med show out
again but it soon went broke in Sugar Creek, Ohio. Eva Davenport and her
infant daughter Norma, returned to her home in and for a time took up
residence. Meanwhile Ben watched the ads in the Billboard and joined Milton
Holland in framing a indoor circus to play Elks’ Club auspices in the Pacific
Northwest. They stayed out 26 weeks. He later went back to med shows playing
halls for five and six day stands. For the next two years he was rassling
bears and selling medicine. By that time his trucks were worn out and he
replaced them with a couple of old Chevrolets. This was the start of the
Davenport Society Circus, in 1935, using a side wall corral, two trucks and
an air calliope as the physical property. This little show grew, and
continued under that title through the 1939 season. In 1940 the title was
changed to Dailey Bros . Ben and Eva bought Honest Bill Newton’s elephant,
Nemo, their first elephant. They later bought a second bull from Newton,
Rosie, as well as two camels and a manage horse. The 1940 season lasted until
December 14th, and a small winter unit toured for six weeks, prior to the
opening of the 1941 season. R. M. Harvey was now general agent, and the show
was destined to grow fast from that point on. In 1993 Benjamin C. Davenport
was inducted into the Circus Hall of Fame. Eva Billings Davenport passed away
on February 22, 1958 in Sarasota Florida