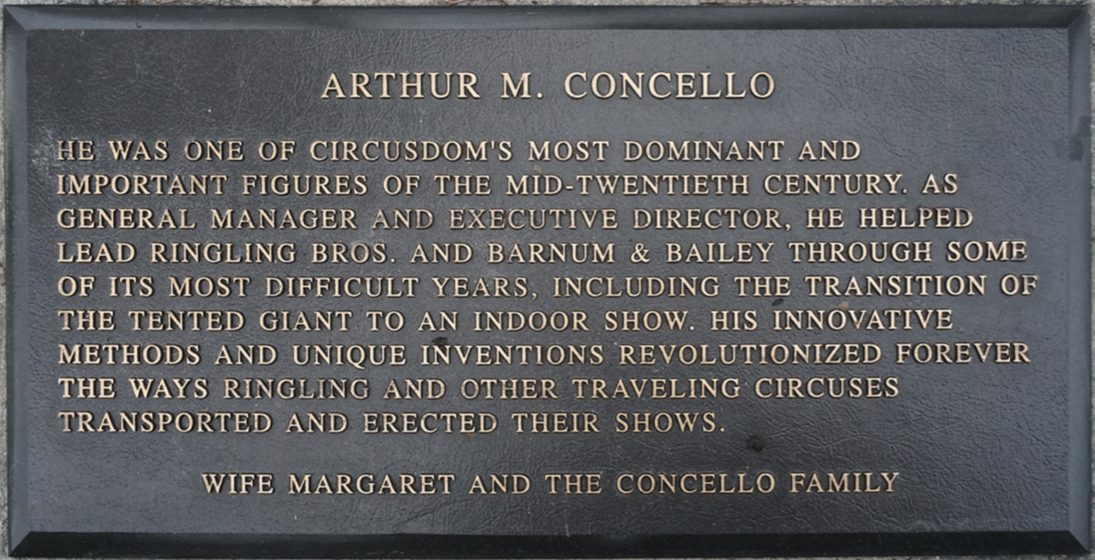 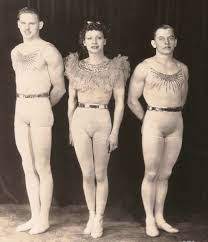 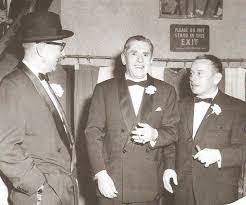 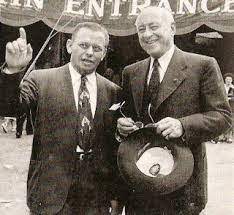 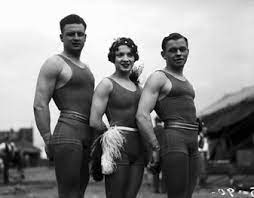 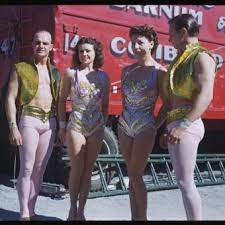 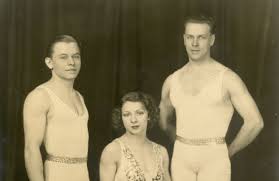 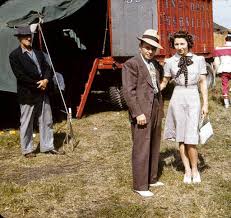 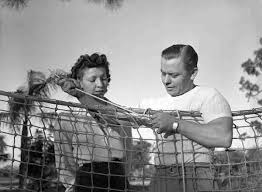 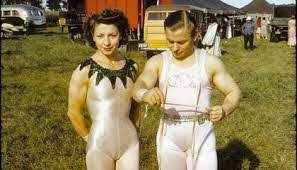 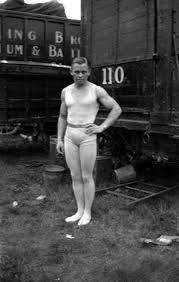 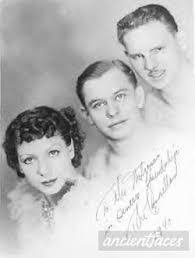 Arthur Concello was born Arturo Vasconcellos in 1912, the son of a Portuguese
railway worker from Spokane, Washington. When he was three his family moved
to Bloomington, Illinois, and at the age of 10 he began training with Eddie
Ward, one of the great flyers of his time: Bloomington being a center for the
training of circus artistes and for the American Circus Corporation. By the
time he was 16, Concello was a member of the Flying Wards’ act with the
Hagenbeck-Wallace Circus, and at 18, following Ward’s death, he had formed
his own number, the Flying Concellos. Mickey Comeau had been a fellow flyer
in the Ward number, and when her convent-novice sister Antoinette visited
her, Artie fell in love. Antoinette, born in Quebec of French-Canadian parents,
was also the child of a railwayman. They married, and on Ward’s death they
bought his training establishment and Concello taught Antoinette all he knew
about flying. She became the world’s foremost woman flyer, regularly
performing a two-and-a-half somersault and later the triple. By 1932 they
were with “The Greatest Show on Earth”, Ringling Bros, and Barnum
and Bailey, the world’s largest travelling circus, and the following year
took the centre ring from the Codonas. In the winter of 1932-33, Bertram
Mills booked them for his celebrated circus in London but a clause in their
contract stated that the triple somersault had to be performed by Concello.
He failed in rehearsal and on the opening night to satisfy Mills, and his
contract was formally torn up. The Concellos returned to London for the
1934-35 winter season, when Art triumphed with his triple, and Antoinette
with a sensational two-and-a-half somersault. Appearances in the Scala,
Berlin, a variety theatre and the famous Cirque d’Hiver in Paris followed
before they returned to America. The ambitious Concello decided to train
others in his craft, and at one time had as many as 50 gymnasts working for
him, with three of his flying acts featured with “The Greatest Show on Earth”
for some years. His sights were set still higher, however, and in 1942 he
became manager of the show and in 1943 he bought the Russell Brothers’
Circus, the biggest motorised show in America. He operated it successfully
for five years until John Ringling North, ousted from the family business,
saw a way of regaining his supremacy over the Ringling show. He called up his
old friend Artie Concello, asked for a loan of $100,000 and persuaded
Concello to sell the Russell show to its star, the wild animal trainer Clyde
Beatty, and return to Ringling as its General Manager. Concello agreed,
demanding a salary equal to North’s. Concello invented a portable collapsible
steel grandstand mounted on mechanised wagons which saved a huge amount of
time and labour erecting seating for thousands of circus spectators. North
financed the production of the prototype and bought 28 of the wagons outright
from the manufacturer but gave Concello $20,000 a year in royalties for the
next 10 years, thus using circus funds to pay off a personal debt. However,
although Concello fought to modernise the technology of the circus on the
road, the travelling circus on the scale that Ringling was had become a
dinosaur. Concello wanted to cut the size of the show and also the number of
train carriages it travelled on, but that was not North’s style. They fell
out, and Concello left. The travelling circus finally floundered mid-season
in 1956 and North closed the show. He called Concello back into management to
streamline and modernize the circus operation for indoor arenas. But the
price Art Concello exacted was a heavy one, a directorship, a seat on the
board and a 10 per cent stake. Concello proved to be a genius in moving the
circus into buildings, figuring out the complex logistics and ways to
standardise the indoor circus equipment to fit into arenas of varying sizes,
and developing railway carriages that made loading and transporting the
circus wagons easier. It proved the end of the big top tradition but led to a
far more profitable future for the circus in arenas. John Ringling North, the
playboy king of the circus world, dreamed of taking his circus on a tour of
Europe, as Barnum and Bailey had done at the turn of the century, but left
Concello to organize it. The result, in 1963, was a shambles, and Concello
took the blame. On returning to America from the premiere in Lille, France,
Concello found he had been sacked. In November 1967, North sold the Ringling
Bros and Barnum & Bailey Circus, and Art Concello, already a wealthy
man, benefited by the sale of his 10 per cent stock to live happily every
after. Antoinette Concello and Art were divorced and later Concello married
the British dancer and aerialiste Margaret Smith. In 1952, the film mogul Cecil
B. DeMille made the blockbuster movie The Greatest Show on Earth , a deal
brokered by Concello, which brought a great deal of money into Ringling’s
coffers and into Concello’s pocket too. The role of the circus manager was
played by Charlton Heston, while Antoinette Concello was responsible for
training Betty Hutton in the skills of the trapeziste. It is generally
believed that the part of the circus manager, tough and single-minded in his
ruthless running of the big show, was based on Arthur M. Concello
himself.